When it comes to measuring the intensity of tornadoes, you may have seen an "F5 tornado" referenced or an "EF5 tornado." So, what is the difference, or are they essentially the same? Let's take a closer look.

Both of these scales classify tornadoes based on the type and severity of the damage they cause, but there ARE differences between the two.

The Fujita scale was developed in the 1970s by meteorologist Dr. Tetsuya Theodore Fujita. It uses six categories, ranging from F0 (weak) to F5 (violent), to classify tornadoes based on the type of damage they cause to structures and vegetation. Fujita intended to provide a way to estimate the wind speeds of tornadoes based on the damage they cause.

The scale is based on the observation that winds within a specific range of speeds typically cause certain types of damage.

Weaknesses of the original Fujita Scale

As weather technology improved, weaknesses in the Fujita scale were noted. One limitation was that it was subjective. Since it was based on visual assessments of the damage caused by a tornado, the rating could be influenced by the experience and expertise of the person observing. This led to inconsistencies in the ratings given to different tornadoes.

The original Fujita scale also did not account for the size or width of the tornado, which is an important factor in determining the intensity of a tornado. Lastly, it didn't allow for the fact that damage noted on structures didn't account for the type of structures, their age, or how well-built they were, which are important in the accuracy of the rating.

In 2007, the National Weather Service (NWS) introduced the Enhanced Fujita (EF) scale, which made several changes to the original Fujita scale. The EF scale used the same categories, but it changed the range of the wind speeds. It also modified the criteria used to assign a tornado to a particular category, taking into account new research on wind speeds and damage patterns. The EF scale also includes specific definitions for each category, including the structure types and vegetation that are likely to be damaged by winds within that range.

The wind speeds for each category of the Fujita scale are defined as: 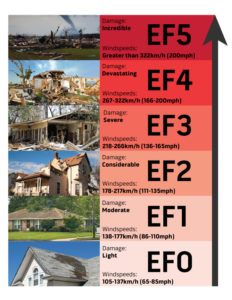 EF5: Over 200 mph - includes tornadoes that cause incredible damage, such as completely destroying homes and businesses of any kind, destroying large vehicles and throwing them thousands of feet, and carving out wide swaths of destruction. Skyscrapers sustain major structural damage, grass is ripped out of the ground. Wood and any small solid material become dangerous projectiles.

EF3: 136-165 mph - tornadoes that cause severe damage, such as tearing off roofs and outside walls of well-constructed frame homes. Trees in the path are uprooted or lofted. Two-story homes have their second floor destroyed, high-rises have many windows blown out, radio towers blown down, metal buildings (i.e. factories, power plants, and construction sites) are heavily damaged, sometimes completely destroyed. Large vehicles such as tractors, buses, and forklifts are blown from their original positions.

EF2: 111-135 mph - tornadoes that cause considerable damage, such as tipping or overturning large vehicles and mobile homes, tearing off roofs and damaging walls of frame houses, and destroying weak structures like large sheds and outbuildings.

EF1: 86-110 mph - includes tornadoes that cause moderate damage, such as tearing off shingles, collapsing small sheds and outbuildings, and damaging mobile homes.

EF0: 65-85 mph - tornadoes that cause light damage, such as breaking branches off trees and damaging roofs and siding.

EFU: Unknown - sometimes a tornado is observed with no surveyable damage, so the intensity cannot be determined. This happens when tornadoes pass areas with no damage indicators, or cause damage in an area that cannot be accessed by a survey, or cause damage that cannot be differentiated from that of another tornado. Though EFU is not an official part of the Enhanced Fujita Scale, it's a helpful reference when a tornado can't be measured.

It's important to note that the wind speeds for each category are estimates and are based on the type and severity of the damage caused by a tornado. The actual wind speeds of a tornado can vary significantly and may not always correspond directly to the category assigned to the tornado by experts. Additionally, the path of a tornado, the size of the tornado, and the duration of the event can all affect the amount of damage a tornado causes, regardless of its wind speed.

So what are the main differences between the Fujita scale and the Enhanced Fujita scale? The main difference is that the EF scale is more refined and based on more current research. It provides more specific definitions for each category and the type of damage. It takes into account new research on wind speeds and damage patterns. As a result, the NWS now uses only the EF scale to classify the intensity of tornadoes in the United States.

One important thing to note is that even the Enhanced Fujita scale is not a perfect system for measuring the intensity of tornadoes, and is still subjective. It is still based on observations of damage caused by tornadoes, and many factors can affect the amount of damage a tornado causes. For example, the type of building materials used in a structure can influence the extent of damage caused by a tornado, as can the age and condition of the structure. Additionally, the path of a tornado can affect the amount of damage it causes, as can the size of the tornado and the duration of the event.

Despite its limitations, the EF scale is still a valuable tool for understanding the intensity of tornadoes and the potential hazards they pose. Using this system, meteorologists and other experts can provide important information to the public about the severity of a tornado event and help people make informed decisions about how to stay safe.

It's also important to remember that these tools are used to tell us what happened after the tornado strikes. Homeowners, business owners, and community leaders should plan ahead and make plans before the storm season begins.