It's National Preparedness Month, but how prepared will you be when a tornado touches down in your area? As you may have read, the area known as tornado alley is changing, and tornados have touched down in all 50 states.

If you live in an area where tornados are a common occurrence during parts of the year, then you’ve probably been in the situation of hearing tornado sirens sound. Hopefully, you’re prepared and have a storm plan for your family. Maybe you have a basement to wait out the storm or, even better, an EF5-rated Survive-A-Storm Shelter to get you through it.

But, wait. What if the skies outside that day tell a different story? This may cause some people to second-guess the sirens. (We’ve all heard the jokes about people waiting outside until they see the tornado.) This creates a “boy who cried wolf” mentality. If you shelter five times during alert sirens and the threat never comes within miles of you, you may start to ignore the threats, or at least feel the need to go outside and see if a threat is near.

In addition, there are occasionally concerns about whether or not it's safe to go to sleep overnight at a time of severe storms. Do you stay up all night, waiting to see if your home and lives are in danger?

See the Storm or Take Cover? Have You Risked It?

On a day of tornadic activity, just as important as the shelter is the warning that tells you to take cover. Unfortunately, research and countless videos show that individuals still feel like they need to “see the threat” because the area being alerted is much larger than the area in danger. Sometimes, even with a trained meteorologist firmly urging them to “take cover,” those in danger still need to look and see if the situation is serious enough that they “really” need to take cover. 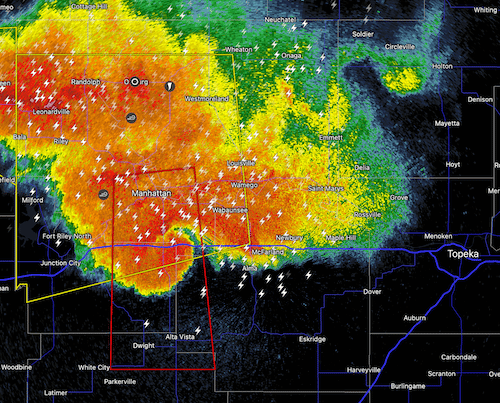 Meteorologists at the National Weather Service (NWS) use state-of-the-art technology to monitor tornadoes and localize the danger, creating storm-based warnings. When the NWS puts out a warning, they have typically selected a specific area under threat. The selected area for their storm-based warning is called a polygon area. On these maps, tornados are designated using a red polygon and severe storms, a yellow polygon. In the map shown here, the super cells are moving straight south and addresses in the red polygon should take cover.

The meteorologists on television pass NWS information along to their viewers, showing maps that break down the polygon area, and they may talk very specifically about affected neighborhoods. For example, they’ll sometimes show a map with an area zoned off that is affected by the warning; however, their audience is likely a larger area.

Other warning systems, like the previously mentioned tornado sirens or even weather apps on phones, broadcast warnings for whole cities or counties. This discrepancy happens because tornado sirens are more sporadically placed, so in order to warn those in the polygon, they have to warn the larger area.

Launching today, during National Preparedness Month, Survive-A-Storm has created the StormWarn System, powered by WeatherCall. The service is available to anyone, anywhere in the country, who wants to be alerted about threatening weather in their area.

This system is different from local tornado alert sirens. It is designed to warn and notify only the people in an NWS polygon. Those outside that area do not need to take cover because the tornado poses no threat to their location.

With this tighter polygon, combined with today’s GPS location technology, the system alerts subscribers when their home’s address is in the same polygon area as the threat. This first step is called StormAlert, and subscribers can choose to receive a call, or a text telling them it’s time to take cover. (Or even both alerts.) The StormAlert is a more reliable alert than others and promotes the use of tornado shelters. Subscribers know that if they are getting an alert – the threat is real, and it is time to get to shelter! And, as long as a phone call will wake you up, no need to worry about storms that could endanger you after you go to sleep.

StormAlert is sent for two critical weather situations. The two critical alerts are, first, dangerous winds over 80 mph and second, a tornado on the ground in the subscriber’s polygon area.

Another issue during severe weather is knowing when it is safe to come out of the tornado shelter. The next step in the StormWarn System, StormClear, provides an “all clear” alert with a call, or a text. This time, subscribers are alerted that the threat has ended. There is no question about whether it is safe.

Those two steps, StormAlert and StormClear, are provided to all subscribers of the StormWarn service. By eliminating the number of threats sent out, recipients understand it is time to take cover, and they know when to come out.

Owners of a Survive-A-Storm Shelter can choose to subscribe to an additional benefit in the StormWarn System – the personal touch of StormRespond. This step is activated if a tornado touches down or causes damage in a specific polygon area. First, a live call is placed to see if subscribers need assistance. If no response is received, the subscriber’s three contacts are called. If no one can be reached, local authorities can be sent to find out if assistance is needed. This step alleviates the fear of being trapped in debris in the aftermath of the storm.

Get pricing for this valuable tornado alert program and signup today.

The Survive-A-Storm sales and marketing team curates and writes on a variety of topics regarding storms, tornadoes and safety. To inquire about any of the topics your read about on our blog, connect with us.