Tornadoes are one of nature’s most elusive and almost mystical phenomena. As a result, a large number of myths have developed around them throughout the decades. Unfortunately, those myths can put you and your family in great danger if a tornado approaches. So, we’ll run down some of the most common: 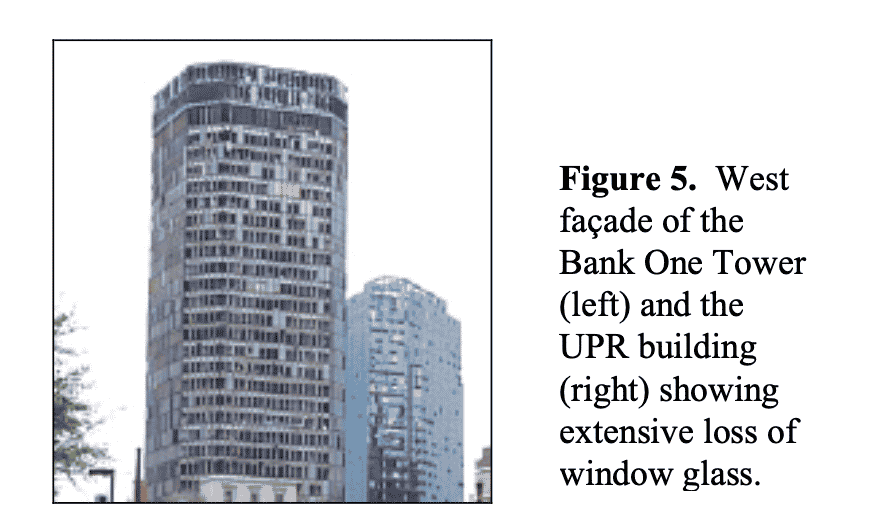 You can fill in the blank with downtowns, lakes, rivers, mountains, and several others. The fact is that tornadoes will strike anything. The reason they seem not to strike downtown areas is that downtowns are a minuscule percent of the geography of the United States. However, the damage can be quite serious when they strike a downtown. Downtown Ft. Worth was struck on March 28, 2000. The photo here depicts the damage caused to two of several high-rise buildings. At least two buildings had to be razed due to the extensive nature of the damage. The image is from Damage Survey and Radar Analysis of the Fort Worth and Arlington, TX Tornadoes on March 28, 2000, by Timothy Marshall and Michael Foster.

The number of lakes and rivers crossed by tornadoes is far too numerous to count. So, if you are in a tornado warning, and near a place or structure where "tornadoes won't strike" - take shelter immediately!

This statement is the opposite of the first myth: that tornadoes can set their sights on a given location. Mobile homes are more dangerous than conventional housing, causing more people to die when major tornadoes strike. Therefore, every mobile home or mobile home park east of the Rockies should have a common shelter or individual tornado shelters. It seems like mobile homes are struck more often because, unfortunately, fatalities prompt news coverage. For example, during the 1991 Wichita-Andover Tornado, 200 people sheltered in the common Golden Spur Mobile Home Park’s tornado shelter without a scratch, while 13 remaining in their homes were killed.

Shelter in the Southwest Corner of the Basement.

Open Windows to Equalize Pressure as a Tornado Approaches.

Meteorologists are responsible for these myths. During the beginning of the tornado warning program in the 1950s, we told people to take these measures. However, subsequent research has revealed they are incorrect and, in the case of opening windows, dangerous.

When a tornado warning is issued, go immediately to your Survive-A-Storm shelter, your basement, or a small room (closet or bath) in the middle of the home on the lowest floor. It's important to have a family tornado plan.

Tornadoes Always Have a Funnel Cloud.

This myth, surprisingly, is not true as some storms – known as landspouts – build from the ground up. I saw this myself when I encountered a tornado on April 29, 2022. 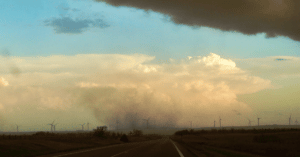 As I drove south on Kansas Highway 15, I saw rotating debris form in front of me. It rapidly developed into a full-fledged tornado that damaged structures. 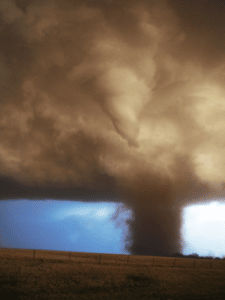 One can tell the difference between a tornado and a harmless dust devil by noting that the latter occurs under clear skies.

If I Don’t Live in “Tornado Alley,” I Don’t Have to Worry About Tornadoes.

Tornadoes have occurred in all 50 states. On June 19, 2022, a tornado with 125 mph winds occurred in the high altitude of northeast Utah. That wind speed is strong enough to cause serious damage and injury. If you observe a tornado anywhere, please take tornado sheltering precautions.

I Can Outdrive a Tornado.

The reality is: probably not.

Weather scientists now know that tornadoes can have forward speeds as fast as 99 mph. Plus, tornadoes do not have to stop for traffic, traffic signals, et cetera. If a tornado is visibly approaching, try to get into a substantial public or government building. Fast food establishments and other private businesses lock their doors to avoid liability. If no public building is available, exit the car and find a low place along the side of the road that will be out of the path of flying debris.

That brings us to the next myth:

Sheltering Under a Bridge is a Good Idea; I’ve Seen It on TV.

That video came from a lucky but unfortunate tornado encounter on April 26, 1991.

A news crew from KSNW-TV Wichita was returning to the city when they encountered a tornado. They fled to the underside of a bridge and filmed the encounter. It made national news and was seen by millions! (These days, we'd say it went viral.)

Here’s the issue: that bridge had a unique design that protected them. The vast majority of bridge designs increase the wind speed and, correspondingly, the danger. Never shelter under a bridge for hail or a tornado.

The best place to shelter will always be in a designated tornado shelter. If no shelter is available, seek shelter in a basement, or the lowest level of a home or other sold building, in an internal room, preferably with no windows, or far from windows.

The best tornado shelters, like those from Survive-A-Storm, carry the approval of the National Storm Shelter Association and are tested by the Texas Tech Wind Institute. Talk to us today to find out how we can help.