Crazy Tornadoes | Is There a Shift in the Ranks?

Texas, Oklahoma, and Alabama are typically in the outrank other states for the most tornadoes each year.  However, all three states have been bumped down while Georgia has claimed the number one spot in the nation so far for 2017.  January 21st-22nd staged a two-day outbreak which broke state records and rocked the Southwestern area of Georgia.  In the previous 20 years, Georgia ranked 19th with only 30 tornadoes per year; however, in the January outbreak, 35 tornadoes were confirmed.  From January through May, there have been over 100 tornadoes in Georgia, with another outbreak occurring in early April. Thirty-four tornadoes developed over 3 days from April 3rd through April 5th.  Sadly, and so far, about ½ of the U.S. tornado deaths have occurred in Georgia this year, 16 of which occurred on the January 21st-22nd outbreak. 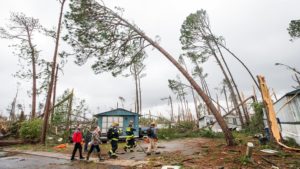 One area in the Southwest most particularly effected was Albany, Georgia.  One thing to note of a importance is reports of “a concrete block church (that) was demolished”.  Many concrete storm shelter companies will tell their customers that concrete is as durable as steel.  That is simply not true.  We hear of more concrete shelters that crack or crumble under pressure and know that steel is always a better option.  When it comes to tornado shelters, research shows that the best use of concrete is to mount an above ground steel storm shelter to.  We are either testing the concrete we are mounting our shelters to or we are pouring our own slab.

When combined with our anchoring system and solid concrete slabs, our steel storm shelters are the nearest absolute protection anyone can have against tornadoes!

While it appears that the U.S. has made it through another tornado season, one thing is certain, the inability to determine an actual ‘tornado season’ is one of uncertainty and ambiguity.  Even if we pull up weather reports right now, the chance of a tornado forming somewhere is possible.  Even Georgia’s newest records were set outside of ‘tornado season’.

So, what can we do to protect ourselves?  Prepare.  Create a family safety plan for you and your loved ones.  And if you would like to know more information about how we can help you, please give us a call.  We are not into high pressure sales, we are into protection.  Our shelters are built to be Solid. Safe. And Secure.  Give us a call today.  1-888-360-1492