Update: June 16, 2022: In the spirit of transparency, it was discovered during a routine update of our website that the original article in dispute has been retracted, and removed from the web. This occurred after the National Storm Shelter Association went on to publicly rebuke the claim about Above Ground Tornado Shelters.

From 2015: I was appalled this evening to receive a Google Alert pointing to an article that referenced a press release purportedly issued by Granger Plastics. The press release made the claim, "An underground shelter is still preferable to Above Ground Safe Rooms, because most safe rooms did not survive the Moore storms because the winds were consistently above the 250 mph mark. If you are underground, it doesn't matter if the winds are 900 mph, it is still going to pass over you and you will be safe." 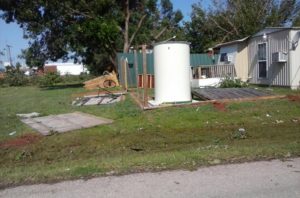 Actual Above Ground Safe Room from Survive-A-Storm Shelters that illustrates the falsehoods from Granger Plastics.

Here's the problem. The assertion by Granger Plastics that "...most safe rooms did not survive the Moore storms..." is simply untrue. According to world-renowned tornado expert Larry Tanner, a research associate at the National Wind Institute at Texas Tech University, and as reported by Bryan Dean of The Daily Oklahoman:

" 'They all performed great,' Tanner said. 'We continue to have great success stories both in Joplin and in Oklahoma City.' "

It is our opinion that the press release by Granger Plastics is an attempt to disparage their competition's above-ground safe room products. Of course, not all above ground safe rooms are created equal. Any residential safe room or storm shelter should be built to FEMA 320 guidelines. One way to make sure that a safe room is safe is to purchase or contract to have built a safe room fabricated or constructed by a Producer Member of the National Storm Shelter Association (NSSA). Survive-A-Storm Shelters is a Producer Member of the NSSA that fabricates both above ground and underground storm shelters and safe rooms. Our shelters are constructed to meet FEMA 320 guidelines, and all of our shelters are available through The Home Depot at homedepot.com and at select Home Depot store locations in Texas, Arkansas, Kansas, Missouri, and Oklahoma. Many companies make outrageous claims. Make sure to do your own research. If it doesn't pass the stink test, it's probably not true!

The Survive-A-Storm sales and marketing team curates and writes on a variety of topics regarding storms, tornadoes and safety. To inquire about any of the topics your read about on our blog, connect with us.